Friday 24th of July – the last day of club désirer in Bar 7 Rayos in Montevideo.
The Bar offered us a good basis to discuss, have a smoke or look at the collected quotes, ideas or objects in relation to democracy and beauty that we collected during the week. 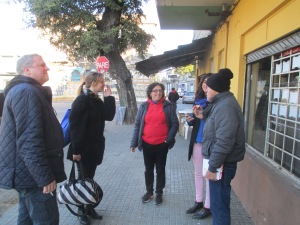 At 5pm Paula Delgado gave us an input on law 17.515 that is regulating sex work in Uruguay. The law was passed in 2002 under president Jorge Batlle. Paula presented the crucial parts of the law and her presentation had been the starting point for a intense discussion that lasted more than two hours. The group discussed the commercialization of the human sexuality, the exploitation of the female body and how the use of the language sets cultural definitions that are defended and kept. The evening was very international – we had visitors from Venezuela, Peru, Columbia, Switzerland and Poland.

The different cultural experiences had been the basis for the discussion around gender questions, human rights and the reality of politics in the different countries.

Discussions need to end at a time and we could close the evening again with Live music:
Nicolás Estefanell at the guitar and Gabriel Ramos, percussion presented some songs from their new project and took us on a journey through the country and the urugayan identity. Later the party went on outside of the Bar 7 Rayos – we don’t have pictures, but there plans were made to meet in the Bar regularly and discuss modern democracy.